The little teaching iCan that could

For more about making the iCan stoves see: The Peacham iCan TLUD instructions on the Stove site 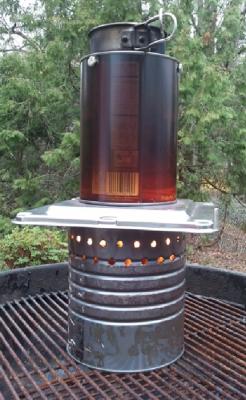 My little iCan made from a 3 lbs Costco coffee can boiled 1.75 liters of water in 42 minutes this afternoon. Ambient temp was 47 [8.33C]. This was done in 5 batches averaging 350 ml each. A very clean burn. Some soot at the start of each batch when the water was cold. Just a soon as the water in the cup warmed up a bit, the soot stopped.

Of course I also made some biochar as well.

Fuel was a good quality wood pellet. Cost of fuel: about 17 cents assuming pellets at $230 per ton. They can be bought for a good deal less, but I am using a higher number to be safe.

Cost per liter boiled: ~ 7.4 cents, allowing 4 cents as the value of the biochar captured at the rate of 17.5% of the dry weight of the fuel.

Total run time was 49 minutes. The first 2 minutes were allowed to burn with no load, ie an unobstructed stack. This burned off the alcohol starter. Boiled water for the next 42 minutes. Last 5 minutes were at the tail end of the energy curve and only warmed the water in the cup, but the water did not boil. With a bit more fuel I could have finished of another 350 ml of water.

In a professionally designed stove, I would expect better numbers -- of course! But, for a simple educational tool costing nothing or very little, I am pretty happy with these results. 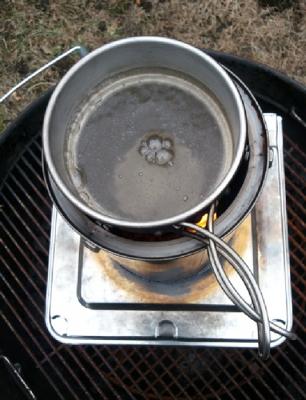 Almost boiling. I timed each "boil" until a full rolling boil was achieved.

I wonder how this tacks up against other test results?