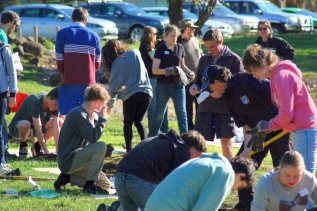 Please do read the full report, these are highlights:

Kardinia College Trail
A comprehensive small-scale trial was implemented at Kardinia International College to investigate if biochar soil amendments have an effect on the aboveground biomass and growth response of a selection of native species indigenous to the Geelong region.

Rainfall was almost non-existent and average summer temperatures were the warmest on record from establishment (spring 2012) until autumn 2013. Addition of biochar appears to have had a positive effect on the growth response (canopy and height measurements) of Yellow Gum in this scenario. Data for Drooping Sheoak and Blackwood are encouraging with respect to seedling height, but not for canopy diameter to date (this will be monitored over time).

We may hypothesise that no amount of biochar could prove beneficial to seedling survival under these adverse growing conditions. The statistical analysis revealed that, although there were borderline to indiscernible differences in survival rates within genera, when we examined seedling survival data overall, the medium biochar treatment plots were significantly enhanced in their survival rates compared to the control plots.

Twelve native tree and shrub species from known-age revegetation sites across south west Victoria were sampled in order to determine their energy potential. Seven stem-wood samples and thirteen total above-ground biomass samples were obtained. All samples taken were introduced to a modern thermal gasification system to produce synthetic gas and biochar which were sampled for subsequent analysis.

All samples were successfully flared with synthetic gas and biochar recovered for analysis in each case, only the physical characteristics of the biomass samples affected the ability to optimize the gasification process. The analysis determined that to produce a nominal 250kWe of hourly electrical generation an average of 340kg of mixed native species biomass would be required.