Because I really had no idea about how much energy it takes to make
charcoal, I made a table from the specs of the Chinese equipment posted by
gordon eliot. Then I calculated the "Energy Cost" of each component in
(MJ/kg). Finally I aggregated the energy costs from the "suggested
charcoal plants" to get an idea of the energy cost of the entire system.
Note that all of their plants use the new high efficiency coal bar
machine. This should represent a best case scenario: maximum rated
charcoal production at rated power. If you make less charcoal and consume
the same power, the energy cost goes up.

Consider this a first step in understanding the energy efficiency of the
entire process. To complete the analysis, we would have to know the energy
content (MJ/kg) of the produced charcoal. The big question is: can you
power a 30kW generator with the syngas in order to take the small charcoal
plant off the grid? 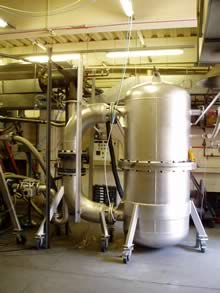 In 2004 Biofuel Energy Systems Ltd. developed a plant for charcoal production, which uses the gases given off during production to drive a gas turbine, generating heat and electricity. The electricity generated can be used on site (especially useful in remote areas with no electrical grid connection) or sold back to the grid for additional profit.

Production and use of a soil amendment made by the combined production of hydrogen, sequestered carbon and utilizing off gases

Production and use of a soil amendment made by the combined production of hydrogen, sequestered carbon and utilizing off gases containing carbon dioxide
United States Patent 20040111968
Day, Danny Marshal (Atlanta, GA, US)
Lee, James Weifu (Knoxville, TN, US)
06/17/2004

FIELD OF THE INVENTION

A handy kiln for making charcoal from urban leaf litter

This site www.biogasworks.com is the portal for the carbon cycle activities of Chaotech Pty Ltd.

Our slow carbonization pilot plant is now rated 40 to 60kg charcoal per hour for lightweight feed such as sawdust. The specification particle size limit is 8mm largest dimension. Process simulations have produced a yield of ~40% char on a dry mass basis with ~80% total carbon content in the char.

I assembled the Pyrolysis Reactor Tower today. I had it fabricated over the winter. 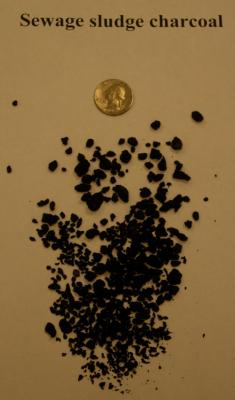 Sewage Sludge Charcoal
I am pleased and somewhat surprised to report that raw sewage sludge is a good feedstock for charcoal production. Details are available on the HNEI website below.