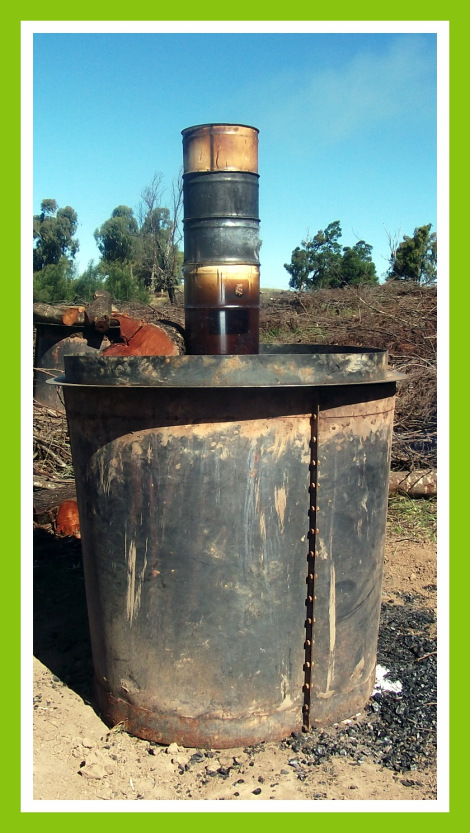 Vuthisa Technologies in South Africa have been working on improving the Portable Metal Kiln Charcoal Making Method and using a retort design to reduce emissions and improve efficiency making charcoal.

They have a great description with lots of detail on their web site: http://vuthisa.com/biochar/
as well as a Google Group:
https://groups.google.com/forum/?hl=en-GB&fromgroups#!forum/portable-kiln

In short the system is composted of an outer drum, often fabricated of sheet steel enclosing an inner set of 30 gallon drums.

Make charcoal in your own backyard

I recently did some trials with 2 x 55 gal drums inside my fabricated Portable Metal Kiln. I recently increased the kiln width from 1.1 to 1.4 metre diam to accept 3 x 55 gal drums and although more testing is required I am satisfied with the MO. I have created a Google Group to discuss issues around its construction and usage. http://vuthisa.com/biochar/
Cost: Under $800
Availability: DIY

Attached as a Power Point file and a PDF is a nicely illustrated guide to creating a TLUD (top lit up-draft) biochar retort with two barrels. As he notes, understanding the TLUD is critical to getting reliable, clean take a look at our other TLUD References for more guidance.

Many thanks to George Packard of Parrot Creek Productions, Warner, New Hampshire for some really fine work. This is the short version of greater works in progress. Very well done by George and much appreciated.

I was surprised that there were no how to's for charcoal productions without the need for kilns, drums etc, so thought this might be of interest to some as a trial technique. It is not very efficient by way of volume of charcoal to volume of biomass to start, but can be useful if you have quantities of garden waste such as prunings, bark, leaves etc. This type of stuff normally goes into green waste, or needs chipping to compost or use as mulch as it is too big for compost bin.

This is a process I have used which requires only an open fire or fire pit, shovel or rake and water (hose or steel buckets with water). It is a minor modification of the techniques used when cooking using the camp oven - which only uses coals instead of flame. Instead of transferring the coals to the oven pit, they are wetted down to stop burning, and create charcoal.

How to Make Charcoal

I've just been playing around with my natural draft stove to see how easy it would be to use it for cooking and making charcoal http://www.youtube.com/watch?v=Y5OAkmum7gU&feature=channel_page .
I fed some extra fuel in the side so show the pyrolysis reaction taking place.